Story of Hope: “All I wanted to do was hug my children.”

One Sunday morning in February 1997, Jacqueline Miller was standing on a  stool hanging curtains in her son’s room.  The last thing she remembers before she found herself covered in blood on the floor is beginning to get down off the stool.  “We figured out later that I must have lost my balance, “ she says.  “I had apparently hit my face — hard — on the corner of my son’s desk.”  The impact had severely injured her spinal cord in the area of her neck and she would need 150 stitches for the lacerations in her face.

Jackie’s spinal cord injury had transformed her in an instant from an outdoor enthusiast, scientist and mother of two young boys to someone who could not walk, turn a page or feed herself.  The prognosis was grim: Doctors told her that she would be permanently paralyzed below her waist, with minimal movement in her arms and hands.  “One of my doctors told me that the best recovery I could hope for was to be able to eventually shuffle 10 feet down the aisle — with a walker — at my son’s wedding,” says Jackie, adding quickly, “They were wrong.” When the extent of the traumatic injury finally sank in, Jackie was in shock and disbelieving.  “All I wanted to be able to do was hug my children,” she says.  “And I couldn’t even do that.”
Those who know Jackie best describe her resilience and determination, and these two qualities, along with her sense of humor, have helped her reclaim her life. She is back at work “more than” full-time and recently got back from a trip to Rome and Morocco with her husband. Her son called the donkey “Mom’s Moroccan wheelchair.” Read more of Jackie’s inspirational recovery here

— Here are pictures of Jackie on her trip; She had been told she would be  quadriplegic: 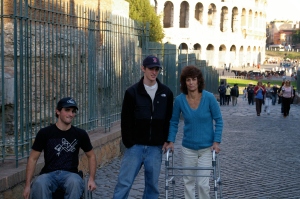 6 responses to “Story of Hope: “All I wanted to do was hug my children.””